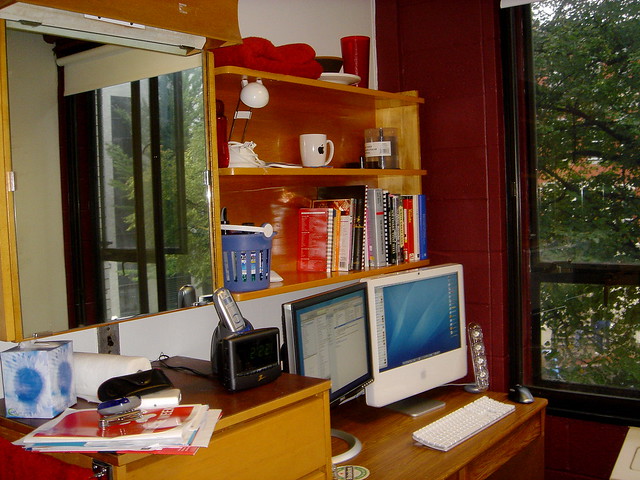 One thing a lot of incoming college freshman worry about is living in dormitories. For many, it’s the first time they’ve lived in this sort of setting, and often with people they do not know, in an unfamiliar town or even state. Looking at it from this angle, it can all seem extremely daunting. However, there are several things you can do to make dorm living easy for yourself, your roommates, and your neighbors.

Respect quiet hours. Many dorms will have enforced quiet hours, often after 10pm or even midnight. It’s important to respect these and keep your noise level at a minimum when in the dorms. Just because you aren’t studying or writing papers or working on something important doesn’t mean other people around you aren’t also. And also, just because it isn’t quiet hours doesn’t exactly give you permission to make as much noise as humanly possible. People will not thank you for it, and honestly, in my experience, more people are studying or doing homework during the day and in the early evening than they are after official quiet hours are in effect.

Do your laundry promptly. The number one thing that puts people on edge in dorm situations is people leaving their laundry in the washers or dryers for an extended period after the time has run out. It’s understandable if you’re 10 or 15 minutes late, if you lost track of time or something, especially if it is at a time that there are not many other people doing their laundry. But don’t abuse the privilege. At the very least, people will post passive aggressive things on Facebook, and at the worst, your laundry will be dumped unceremoniously on the ground.

Be friendly. It’s the golden rule, right? If you want to make friends, or at least be on good terms with your neighbors, be friendly. Keep your door open, friend your dorm mates on Facebook, take the time to tell people hello and ask how their day has been. You don’t have to be over the top happy and bubbly, especially if that’s not your nature, but a little will go a long way.

Don’t start fights. Many times in our lives, there will be people who make us mad or goad us into doing something we may regret. College is no different, especially when living in such close quarters with so many other people. Even when people drive you absolutely crazy, it’s best not to start something with them. While it may seem satisfying at the time to say a snarky comment or talk about them behind their back, is it really worth making a possible enemy that will make things awkward for the rest of the year. If someone is really being a problem, tell an RA or other staff member. Do College Students Need Renters Insurance or Does a Homeowner’s Policy Provide the Right Coverage? 5 Ways Entrepreneurs Can Benefit From College