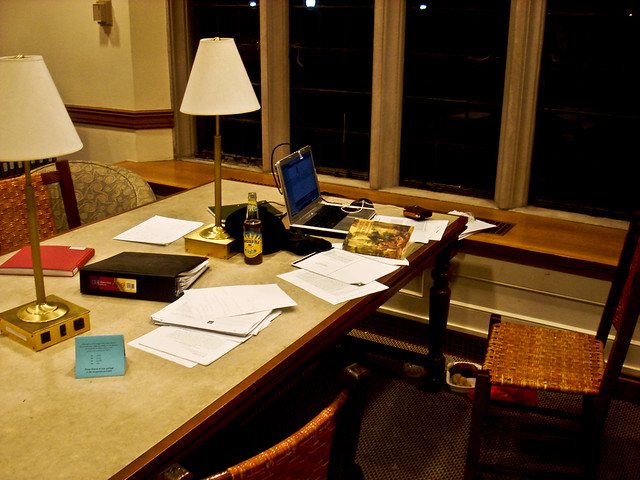 Senioritis (noun) – A crippling disease that strikes high school seniors. Symptoms include: laziness, an over-excessive wearing of track pants, old athletic shirts, sweatpants, athletic shorts, and sweatshirts. Also features a lack of studying, repeated absences, and a generally dismissive attitude. The only known cure is a phenomenon known as graduation.

Senioritis can be a college senior’s kryptonite once the calendar strikes January. The countdown to graduation is ticking down and lax schedules and late nights replace ambition and studies. While letting things roll to a close can be acceptable, like all things, it must be done in moderation.

Long term, senioritis can bite you. Some of the classes you take your senior year may be the most pertinent to your actual field. For accounting students preparing for the CPA, courses can be the bridge between you and your future. The same idea can be said for engineers and science students with aspirations to get into medicine and other majors, too.

Getting a job can also be stagnated due to senioritis—employers do care about GPA to a degree, thus finishing on a high note can be a promising sign. What’s more, many competitive jobs do have GPA requirements, be it a 3.0 average or a 3.5 average, there may be certain qualifications that must be met. Can’t you hear your mother asking, “You wouldn’t want to lose out on a potential opportunity for taking off your final semester now, would you?”

Keeping both your short term and long term goals in mind is the best way to trump senioritis. Considering grad school? Your grades and trends will make a difference, so you’ll want to keep your grades on the rise even as they come to a close.

While you can (and should) enjoy your second semester of senior year, you’ll also want to keep up with networking, job apps and challenging yourself because the “real world” that is on the horizon will be your first real test. If you’re already slacking off and getting out of the swing of things, it’ll only make the transition of 40-hour work weeks and higher stress levels that much more difficult to cope with going forward. While you may think there’s a switch that can click on/off to fuel your work habits, you may have to reconsider and recall what the transition from high school to college was like…

Staying busy your second semester is key. If you’re low on credits, consider auditing class so you’re not sleeping 16 hours a day. Auditing a class is a simple way to just go for the pleasure of learning or listening, even if it’s unrelated to your major. Oh, and you don’t even get graded in the class.

The real challenge of defeating the seemingly unassailable task of senioritis is staying hungry and motivated for both the present and future. While it may appear difficult, keep your head up and attempt to defeat the phenomenon known as senioritis!