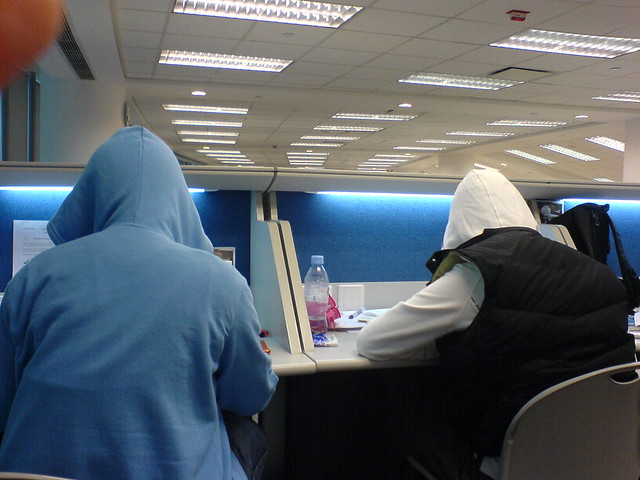 Procrastination is the lacking of motivation and it is hanging up most all of the college nation.

How do college students procrastinate? Well, many times it starts with Facebook stalking your friends and their friends and their friends of friends. Then you see an “As Seen on TV” ad you like for the Snuggie, so you click it. Then you see a must have shirt on that same website.  After ordering $23 worth of clothes, you go on eBay to bid on something you don’t need. Then you check Twitter and retweet things you don’t care about.  Then you get hungry so you make a quick snack. Then you get tired so you take a nap, but promise yourself you’ll start working right after the theoretically short 20 minute nap.  The nap extends itself to 3 hours and 20 minutes, then by the time you wake up, it’s past midnight. The trend repeats itself until a certain deadline hits.  Procrastination is a habit, almost a lifestyle that one must deliberately work to break in order to defeat entirely.

1. Procrastination is all about opportunity cost; that is, what you’re giving up to do something. By putting off your studies, you gain mindless hours on the internet… but while you could get an A on the midterm next week, instead, you get two hours of looking through pictures of a guy named Phil Shifley and a C- on your midterm.  Long term, the grade will have a bigger impact on your prospective career search than ‘Liking’ Phil Shifley’s Homecoming album from 2008. Sacrificing the short-term time filler for the long-term asset will surely pay better dividends.

2. Expect the unexpected.  Or in other words, life is random so be prepared. Things present themselves at the unlikeliest of times so get your term paper done sooner than later in the case you win a vacation package the weekend before an exam, have a family emergency, get tickets to a concert before a presentation or any “once in a lifetime” type opportunity.  The sooner and better you prepare yourself, the less you’ll have to cram and sacrifice other aspects of life.  Equilibrium is key.

3. Often times, you don’t know what you don’t know. You figure out the things you don’t understand once you start the studying. Thus, if you’re studying at 11 p.m. the day before your exam, you may have no support system or teacher that is standing by 24 hours a day to assist you, especially if your exam is early in the morning. The sooner you can get in, the more potential for repetition and retention.

4. Procrastination naturally leads to cramming and cramming is neither efficient nor healthy. The National Sleep Foundation notes that teens work best with 8.5 to 9.25 hours a sleep per night, though teenagers rarely meet that quota.  According to a study at UCLA, students that stay up late at night cramming for tests are more likely to have academic problems the next day.  Don’t try to defy the statistics and research because there’s direction correlation from causation: you flunked your test because you waited until the last minute to begin studying and it caught up to you.  Start early to get your stuff completed on time and to acquire some additional hours of sleep.

5. Time-management is the key to both college and life. If you can master the idea of managing your time and balancing life early, it’ll prepare you for life after college. Getting in a good habit can beat the urge to stall and procrastinate and really jumpstart you.  Statistics suggest that 40% of people have had financial losses due to procrastination (Gura 2008) so do not allow procrastination to limit your potential; maximize your life and take care of business! 7 Survival Tips For Your First Year Out Of College

El Niño Can Affect You and Your Apartment!

There are many sources of data but UCLA Higher Education study is among the most reliable. The data we shared is from here – http://www.heri.ucla.edu/